Read the Transcript Below

David White (Axio) – You know we’ve been through one cycle. We did the Culture of Security Self Assessment in Axio 360 last fall. How was the response of the members to that? How did that impact the overall program last fall?

Scott Aaronson (EEI) – Yeah, so I told you there was some skepticism that first time around. I think, if I recall, our response rate in year one, and granted it was year one, was less than 60%. Our response rate this time around, granted it was year two, but it was more professionalized thanks to the Axio platform. There was a lot of potential value there that the CEO saw for that trend and comparative analyses and that ease of use. And so our response rate went up to more than 90% of EEI’s member companies. So I would say that the proof is in the pudding. People really appreciated the tool. Since then, we’ve also had a lot of responses that this was a much easier platform. They see a lot of potential here. We’re already getting requests for additional capability and use cases. And so looking forward to working with you on how we continue to grow this platform and reflect and respond to the needs and desires of the members. 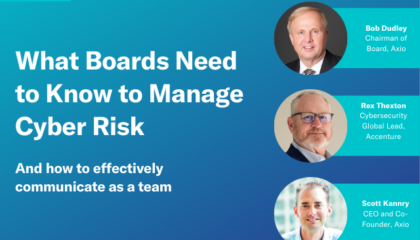 What Boards Need to Know to Manage Cyber Risk